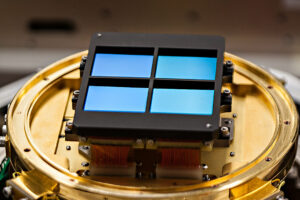 NASA has a long history of developing and launching large space telescopes with the mission of observe astronomical objects within and beyond our galaxy. NASA’s first space telescope, and the first successful telescope launched into space, was the Orbiting Astronomical Observatory (OAO-2), an ultraviolet telescope that was responsible for discovering comets surrounded by large haloes of hydrogen and observing novae in the cosmos whose UV (ultraviolet) brightness would often increase even as their optical brightness decreased. Fast forward a few decades and NASA launched what would become one of the most important and influential telescopes of the modern era, the Hubble Space Telescope. Hubble was designed to observe objects in deep space with an array of instruments to capture near-infrared, visible, and ultraviolet light. Since its launch, Hubble has helped answer scientific questions, including the age and expansion of the universe, establishing that black holes are common at the center of most galaxies, and even extrasolar planets orbiting Sun-like stars.

Now, NASA has launched an even larger and more powerful telescope, the James Webb Space Telescope (JWST), that it hopes will usher in a new, high-resolution era of scientific discoveries.

NASA’s JWST is the most powerful space telescope ever launched into space and is designed to observe long-wavelength visible light and mid-infrared light from the earliest and most distant stars or galaxies. The ability to focus on these light frequencies allows the JWST to capture very old and very distant objects in the universe, something that no other space telescope has been able to do, including Hubble.

JWST houses an array of sensors and instruments called the Integrated Science Instrument Module (ISIM) that will help NASA achieve its mission. One of those instruments is the NIRCam, or Near-Infrared Camera. NIRCam is both an imaging camera and a sensor with two primary functions: to capture images within the 0.6 to 5 micron wavelength and as an alignment sensor for the primary mirror.

NIRCam operates at an incredibly low temperature of 37 Kelvin (-393 F!) allowing the sensors to detect infrared radiation at very specific wavelengths. Because of the hypersensitivity, the sensors are cooled to extremely low temperatures to reduce dark current and read noise, both of which could produce artifacts in the imaging data, lowering the sensors effectiveness and reliability of the sampling. To put this into perspective, the coldest temperature ever recorded on earth was 184 K or -128.6 F in Vostok, Antartica.

NIRCam utilizes two redundant optical systems (Side A and Side B) and both can operate simultaneously. This redundancy is required in the event that one optical system fail’s and because the JWST is designed with a finite lifespan (20 years expected; 10 years planned), the telescope cannot be repaired. While both optical systems are adjacent and can operate concurrently, they each have a unique field of view allowing the two systems to capture views next to each other. The internal optics are triplet refractors and the lenses are constructed from lithium fluoride, barium fluoride, and zinc selenide (LiFBaF2ZnSe) with the biggest lens having an aperture of 90mm. With ten 2048×2048 pixel detectors, NIRCam has a total resolution of 40 megapixels.

NIRCam incorporates a series of filter wheels (long wavelength and short wavelength) to filter light before it reaches the sensors. The filters allow certain wavelengths to pass through while blocking other wavelengths. Filters can also be used in combination allowing for the identification of high-redshift galaxies.

The NIRCam sensor array is collected by the Focal Plane Electronics and is then sent to the main ISIM computer, which transmits back to NASA and other agencies on Earth using SpaceWire.

JWST is technically a NASA mega project, but was developed with international collaboration from the European Space Agency and the Canadian Space Agency. Thousands of people from around the globe, including Germany, France, Britain, and the Netherlands, have helped design, engineer, and build many of the important modules for the telescope.

NIRCam, in combination with the other components of the ISIM (NIRSpec, MIRI, and FGS/NIRISS), will allow the James Webb Telescope to serve as one of the most important space observatories for the next decade. Astronomers worldwide will have an opportunity to perform science experiments that were previously impossible with the hope of learning more about the Solar System, our Milky Way galaxy, and the distant objects in our universe.

To read more about NIRCam and the James Webb Telescope, check out the following resources: